Maurice Horatio Howlett was born on the 26th June 1916, the second eldest son, and one of six children of Frederick and Emily Howlett (nee Wakelin), of Park Street, later of Priestend, Thame.

In 1939 they were living in Hampden Avenue. Before joining the army, Maurice was employed by Messrs Howland & Bush, coal merchants in Upper High Street, and was reported as being a very good footballer.

In the 1930’s he enlisted with the Coldstream Guards, and served with the 3rd Battalion in the Middle East, including Palestine, receiving the Palestine Campaign Medal. At the outbreak of the second world war, the battalion was based at Alexandria in Egypt.

From 1940 onwards the battalion was part of the 22nd, the 200th, and finally the 201st Guards Motor Brigade, each involved, at various times in the ebb and flow of fighting in North Africa.

Sergeant Howlett was killed on what became known in the North African campaign as “Black Saturday”, the 13th June 1942, when the Guards Brigade was forced, with heavy casualties, to abandon Knightsbridge Box, a defensive position around Tobruk during the Battle of Gazala.

2657295 Sergeant Maurice Horatio Howlett, Coldstream Guards has no known grave and is commemorated on the Alamein Memorial in Egypt. He is remembered in Thame on the war memorial and St Marys Church honour board. 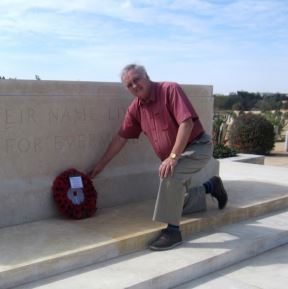