Joseph Squires was born in the autumn of 1891, one of eight children to Herbert and Amelia (nee Shurrock) Squires of Park Street, Thame.

Employed as a carter for a corn merchant in 1911, the following year he married  Susan Jane Munday of Long Crendon but by 1916 they were living in Princes Risborough.  They had three children, George William, and Bertha Victoria, both born in Thame, and Benjamin Herbert, born in Princes Risborough.

It is likely that Joseph was called up after conscription was extended to married men in late 1916 and was initially posted with the 95th Training Reserve (TR) battalion based at Chisledon, Wiltshire, before being transferred to the 20th Machine Gun Company.  The Company was attached to the 20th Brigade of the 7th Division and served in many actions throughout 1917.

It was during the 2nd Battle of Passchendaele, the last major action of the 3rd Battle of Ypres that Private Joseph Squires was wounded.  At the time, the unit was situated along the Ypres-Menin Road, north-west of Gheluvelt.  The M G C lost 33 men (killed, wounded, or missing) in the action that day.

Joseph was evacuated back as far as the Casualty Clearing Station at Lijsenthoek, south-west of Ypres, where he died of his wounds on 27th October, 1917 and was buried in the adjoining plot of land which is today the Lijssenthoek Military Cemetery, Poperinge, Belgium.

Joseph had three other brothers who served in WW1, his younger brother Benjamin being killed n 1918 whilst serving with the Grenadier Guards in France.

As well as the main war memorial in Thame, Private Joseph Squires is also remembered on the memorial boards of St Mary’s, All Saints, and Christchurch 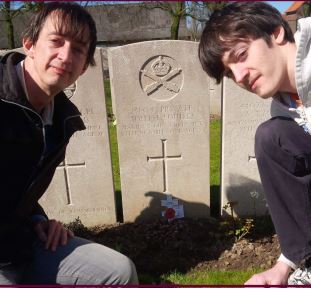