George Asplin Pask was born in Thame in Spring 1878, and was baptised at St Mary’s church Thame on the 13th March 1879. He was the second child of George and Jane Pask (nee Way), and was named Asplin after his grandmother’s maiden name.

Soon after his birth the family moved to Holywell Street, Oxford where his father was a college bed maker. His parents still lived at the same address in 1921.

George married Alice May Harrison in St Albans in May 1900, when he was working as a print compositor. They had a son Charles who was born and died in 1904 and a daughter Doris born in 1907, who died in 1919. By 1911 they were living in Tufnell Park London, where George went on to become an overseer compositor.

When the British government passed the Military Service Act in 1916 and extended it to married men, George was registered and deemed to have enlisted on the 24th June, but it was not until the 21st February 1917 that he was called up, at the age of 38. He was initially posted to the 109th Training Regiment, which at the time was based in Wimbledon.

At the end of November 1917 he was posted to the Middlesex Regiment, 20th Battalion, and on the 10th January 1918
transferred to the 1/19th Battalion, London Regiment who were serving in the Somme area with the 141st Brigade of the 41st Division.

On the 21st March 1918, the Germans launched their spring offensive on the Somme. The 1/19th Londons were heavily attacked in their trenches near Marcoing, south west of Cambrai, the enemy using gas shells, followed up by infantry, and forcing the battalion to withdraw to rear defensive lines.

George Pask was posted missing on the first day of the battle, his presumed death being confirmed a year later.

G/52885 Private George Asplin Pask, London Regiment, has no known grave and is commemorated on the Arras Memorial, Pas de Calais, France. He is remembered on Tufnell Park memorial in London, and his name is to be added to Thame war memorial. 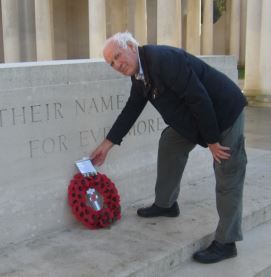