Frederick Neil was born in Shabbington, Oxfordshire on 13th February 1883, one of six children of Thomas and Ruth Neil. He married Hannah (Annie) Doran in Shabbington in 1910 and had two daughters, Rosina, who died shortly after birth, and Freda.

Like his father, Frederick was a farm labourer. As a married man he did not enlist at the start of the war. However, when conscription was introduced under the Military Service Act of 1916, it is likely he was called up towards the end of
1916. Posted to the Oxford and Bucks Light Infantry, he would have undertook training with the regiments Training Reserve based at Wareham, before, in early 1917, being posted to the 2/4th Oxford and Bucks Light Infantry (Service No
204135) who were serving in Northern France.

On the 26th June he was transferred to the 2nd Battalion, Royal Berkshire Regiment (220078), part of the 25th Infantry Brigade, 8th Division. On 16th August 1917 the Battalion fought in the Battle of Langemarke, part of the Third Battle of Ypres and Frederick was one of 120 men reported missing at the end of the day.

Suffering from head wounds, he was captured by the Germans and taken to their field hospital (Feldlaz) as Iseghem, where he died of his wounds five days later on the 21st August 1917, age 34.

Originally he was buried in Iseghem (Izegem) Communal Cemetery German Extension but was reinterred at Harlebeke New British Cemetery, Belgium, in June 1924.

Private Frederick Neil is remembered on the Shabbington War Memorial and a memorial on his wife Annie’s grave in St Mary’s churchyard, Thame. 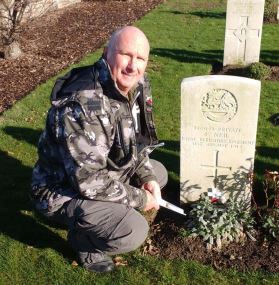