Edward Aubrey Lane was born in early 1892 in Stanton St John, Oxfordshire, one of 7 children to Richard and Julie Lane. By 1901 the family had moved to Thame living in Rooks Place, and then to Lower High Street.

By 1911, Edward had moved to Ealing, where he was working as a compositor, and it was here that he married Ellen Ada Turnbull at St Paul’s Church, West Ealing in October 1915. They lived at 18 Salisbury Road, Ealing, and had a son Aubrey Richard Matthew Lane, born in April 1917.

Edward was attested for service in December 1915, and mobilized in April 1916 with the East Surrey Regiment (No. 3969), initially with the 3/5th reserve battalion and then the 12th (Service) battalion, embarking for France in October 1916.

He was transferred to the 18th (1st Public Works Pioneer) Battalion of the Middlesex Regiment (No 41423) on 9th November, and appointed as one of the battalion drummers. The battalion came under the command of 33rd Division with the pioneers employed in works such as trench construction and repair, wire laying, etc.

In March 1918 the battalion was at Middlesex Camp, Passchendaele. On the night of the 16th, about 2am, Edward was one of three drummers killed when a German shell exploded in the recreation hut. He was 26 years of age. 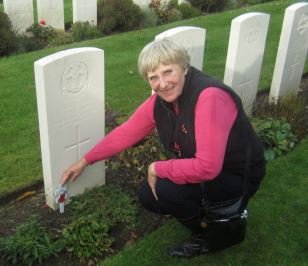