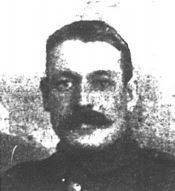 Albert Victor Young was born in Thame in 1883 to Mr and Mrs John Young (nee Newman) of the Four Horse Shoes public house in Park Street, Thame.  The youngest son of six children.  Albert worked at the pub and was well known in the town.  The family later moved to 5 Upper High Street, Thame.

It was as a National Reservist that he re-enlisted on the outbreak of hostilities with the Oxford & Bucks Light Infantry (10097).  After a brief period of training he joined A Company, 2nd Battalion as part of a reinforcing draft at Dhuizel in northern France on the 22nd September 1914.  This was just in time to take part in the “Race to the Sea”, followed by the First Battle of Ypres.  On the 27th November Albert was wounded in trenches near Bailleul, and evacuated to hospital in Lincoln.

After his recovery he was posted to the newly formed Machine Gun Corps (Infantry), and, as part of a reinforcing draft, joined the 27th Machine Gun Company in France, serving with the 27th Brigade of the 9th (Scottish) Division, just before Easter 1916.

In a letter home on the 8th August, Albert describes the company’s involvement from the 1st July on the Somme.  Fighting in the southern sector with their Vickers machine guns, they were in regular engagement throughout the month, suffering heavy losses, but the Division steadily advanced as far as Delville Wood.

During October, the company took part in the last major offensive on the Somme, the Battle of Le Transloy.  On the morning of the 25th October, Albert was killed by shellfire.  It was reported at the time that he was buried with one of “our own men who had fallen a few days before, and with full respect and dignity”, however, post war his grave could not be identified.

30304 Lance Corporal Albert Victor Young, Machine Gun Corps has no known grave and is commemorated on Thiepval Memorial to the Missing of the Somme, France.  He is remembered in Thame on the war memorial and on the honour boards of St Mary’s Church and All Saints Church. 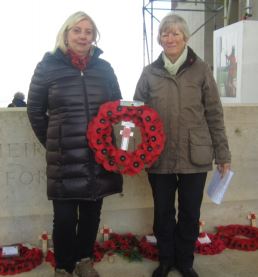