Charles Frederick Bristow was born in Cranwell, Lincolnshire, on 10th October 1898, the son of Fred, who was a farmer, and Rose Bristow, one of three children. After serving during the Great War, he married Elsie Lomas at St Mary’s, Thame on 26th December 1924. She was the daughter of the manager of Thame gasworks.

They went to live in East Kesteven, Lincs, and had three children, Rita, Enid and Annie. At the start of the second world war, Charles again volunteered and after serving at first in the Pioneer Corps and coming through the evacuation at Dunkirk, he transferred to the Royal Engineers.

13005511 Charles Frederick Bristow, Royal Engineers, 22 Bomb Disposal Company, was awarded the George Medal on 17th February 1942 in recognition of conspicuous gallantry for carrying out hazardous work associated with de-fusing unexploded bombs in Rainham, Essex, during the winter of 1940/41.

On the 1st April 1942, in company with Lieutenant Walton, they attempted to defuse a Yellow Peril (British) balloon bomb. The bomb exploded killing Lieutenant Walton instantly, Sergeant Bristow died of his wounds on the 4th April in St Georges Hospital, London.

He was 43 years of age, and was buried with full military honours in Cranwell (St Andrews) churchyard.

He is commemorated on the church memorial in Cranwell village, but has yet to be remembered in Thame. 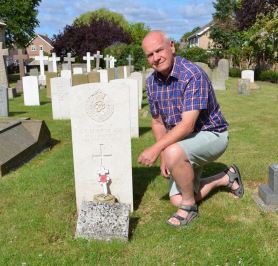