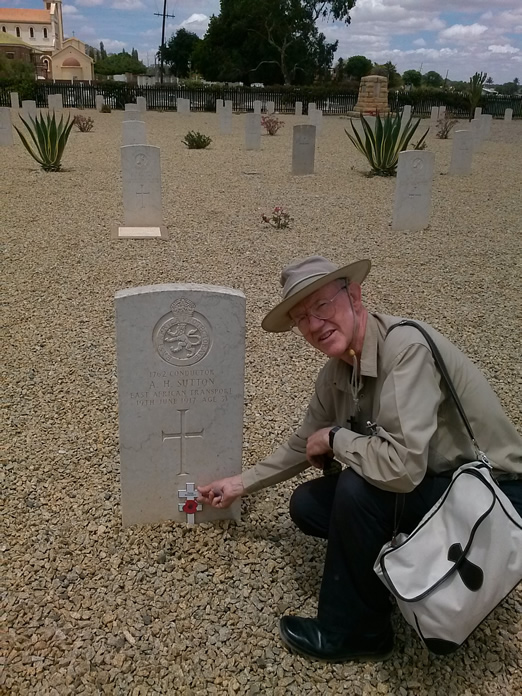 Perhaps the greatest challenge facing the Thame Remembers project was to deliver a cross to the grave of Warrant Officer AH Sutton, who is named on the war memorial in Thame, the difficulty being that he is buried in Dodoma Cemetary, 500km up country in a remote part of Tanzania. By a fortunate coincidence this has already been achieved just three months into the project, when we were approached by a retired Australian missionary priest, Rev Hugh Prentice, who has been living in Thame during an extended visit to the UK but is now returning to Australia and visiting some old haunts on his way. It turned out that he had previously been a missionary in Dodoma, was already acquainted with the cemetery, and was able to place the Thame Remembers Cross at the grave on 29 October.

– Dodoma is the administrative capital of Tanzania. It is situated in the centre of the country some 495 kilometres west of Dar Es Salaam, on the road via Morogoro.

– At the outbreak of the First World War Tanzania was the core of German East Africa. From the invasion of April 1915, Commonwealth forces fought a protracted and difficult campaign against a relatively small but highly skilled German force under the command of General von Lettow-Vorbeck. When the Germans finally surrendered on 23 November 1918, twelve days after the European armistice, their numbers had been reduced to 155 European and 1,168 African troops.

– Dodoma was occupied by South African troops on 29 July 1916, and a casualty clearing station was opened from which burials were made in Dodoma Cemetery, which contains 121 Commonwealth burials of the First World War, 11 of which are unidentified, and 31 Second World War burials.